Home » Is My Puppy Sleeping Too Much?

Is My Puppy Sleeping Too Much? 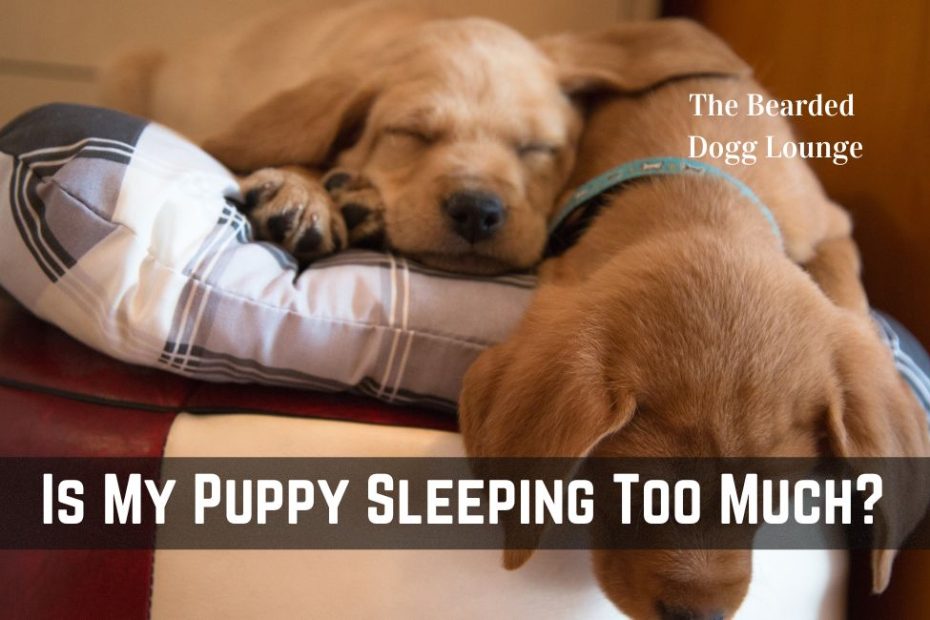 For many of us, bringing home a new puppy is just as exciting and joyful as doing so with a newborn. We keep an eye on the puppy at all times, enjoying her antics (and cuteness! ), and we are mesmerised by her even when she sleeps, her tiny legs twitching in her first doggie dream in her new home. But hold on. Is it normal for her to appear to be sleeping a lot? Is your puppy sleeping too much?

It’s normal to question whether we’re doing things correctly if you’ve never had a dog before or if it’s been a while (or never!) since you’ve had a puppy. We even worry about the significant responsibility we bear for this newest family member and what they will require from us in order to lead fulfilling lives.

When it seems like he is sleeping all the time, we start to wonder and worry. You expect the house training slip-ups, the chewing, and the crazy puppy playfulness and energy.

Does a puppy ever get too much sleep?

The quick response is no. Young puppies require roughly 18 to 20 hours of sleep per day, though the amount will vary depending on age, breed, and activity. (As a comparison, adult dogs typically sleep about 14 hours per day.)

That much sleep is a lot! But when you stop to think about it, you’ll realise how much is actually happening: She’s literally expanding daily, she’s picking up new skills, and she’s playing with you and her toys. It’s draining! Growing puppies also require a lot of naps, just like all baby animals and humans (including newborns and young children).

You want to make sure she gets enough downtime to sleep and rest in addition to exercise and playtime because it takes a lot of energy to develop and learn new things.

Your new puppy will thrive on routine, just like all babies do. You’ll see that he may want to nap for a while after a meal, a walk, or a game of fetch. You and your puppy will benefit from creating a schedule for:

For example: it’s time for a snack, a trip outside to use the restroom, then a nap after a rousing game of fetch, chase, or keep away.

Routines can benefit greatly from crate training because the peace and comfort of his own room will signal to him when it’s time for bed.

Since the majority of your puppy’s daily 18–20 hours of sleep will undoubtedly occur at night, when we sleep, it’s a good idea to limit her nap time in the few hours before you usually go to bed. While you don’t want to overtire or wind her up, you also don’t want her to be wide awake and ready to play when it’s time to turn in for the night because she’s been sleeping too much.

Am I worrying over nothing?

After his nap, what if you go to wake him up but he’s still asleep? (Tip: Allow him to sleep.) What if your puppy sleeps so soundly that she wets the bed instead of waking up when her bladder is full? That was the case with my previous puppy. That’s got to be wrong, right? Although such deep sleep in puppies may not be common, it is not unheard of.

How he acts when he is awake is probably the best sign of normal behaviour. Is he intelligent and active? Engaged with you and other family members (including other canine or feline family members) and interested in his surroundings? He took the sneaker you left by the door and ran off. Is he being a little mischievous? Yes, you have a healthy, normal puppy.

However, if you observe your puppy acting drowsy and sluggish during regular wake times, not wanting to move around much, or otherwise boring and uninterested in his surroundings, this could be a cause for concern. If your pet appears physically depressed during regular waking hours and hasn’t had a recent booster vaccination, he may be extra tired for about 24 hours afterward if that’s the case. Otherwise, call your veterinarian right away.

If not, as the saying goes, let sleeping dogs lie and take advantage of the peace and quiet until your wee fanged tornado wakes up and begins again. Enjoy that time as well after that!